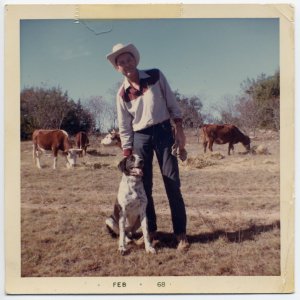 My uncle R.B. was one of those winsome old men who draw kids like honey draws flies—an incorrigible teaser with a permanent, mischievous twinkle in his eye. He almost had me convinced that R.B. stood for “red beans,” which he had with dinner seven nights a week. This salty west-Texan did his time in a General Dynamics factory and savored retirement like it was his parole. He worked to live, not the other way around. He was my playmate, the closest thing I had to a grandfather, and easily one of the greatest influences on my life. Much of what I understand about manhood came from him. And when I think of a mentor, I immediately recall his sun-parched face and this story.

Uncle R.B. considered the dimple-C ranch in Duffau, TX his true home—several hundred acres of grassy pasture, Mesquite trees, a few dozen head of cattle, and an old, black farm truck from the Hoover administration. By the time I was tall enough to reach the floorboard starter button, I had mastered the art of driving. And, despite the sloppy manual gear stick and wobbly steering, I could proudly declare that I had never so much as scratched anything with it. Other, less responsible family members (I won’t embarrass them—they know who they are) had plowed into trees or torn a giant gash in the barn. But not me. At the ripe, old age of eleven, I boasted a spotless driving record.

One sunny afternoon, Uncle R.B. and I finished feeding the cattle in the upper forty, hopped in the truck and headed back to the house. Aunt Montine had supper waiting and I could hardly wait to eat it. As I guided the truck through an opening in the fence between pastures, the front tire caught a rut, jerked the wheel out of my hand, and before I could react, the truck made for a fencepost like it had insulted its mother. The humble post laid down without a fight, but the truck pushed on, lurching and heaving, mashing the poor picket into the ground. Finally, the black beast gave the post one last shove and stalled with a loud bang—a backfire to add insult to injury.

I sat stunned, gripping the wheel with both hands, staring forward, afraid to face Uncle R.B.’s anger or, worse, his disappointment. I heard nothing for what seemed like an eternity. Finally, I gathered enough courage for a glance to my right, only to see the old cowboy twisted into a silent, gut-wrenching laugh. He finally pulled in a giant gasp, enough air to howl with guffawing so loud it flushed a nearby covey of quail.

When he finally composed himself enough to talk, he said, “I don’t know why you’re apologizing. You’re the one who’s gonna fix it!”

We pulled the truck off its victim and made it back to the house just in time for supper. We laughed and talked, ate pot roast, mashed potatoes, and, of course, red beans. No mention of the demolished fence post at all. 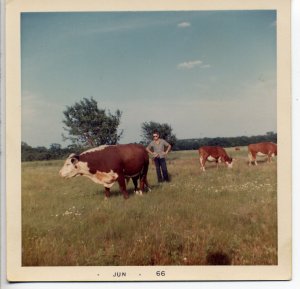 The next morning, after a breakfast of sawmill gravy and biscuits, we threw a new post, some wire, and a few tools into the back of the old truck and headed across the fields. When we got to the site of my mishap, went straight to work. He showed me how to use the posthole digger, and then sat on the tailgate chatting about the weather as I made a new hole. He helped me lower the post and held it steady while I filled around it with fist-sized rocks and dirt. He showed me how to pack it down with several gallons of water and a sledgehammer—a technique that saves the cost of concrete and holds just as tight. I wasn’t strong enough to stretch the barbed wire with the come-along, but I hammered the staples in place. And after we cleaned up the tools, we sat on the tailgate to enjoy a well-deserved drink of water and admire our handiwork.

After a brief rest, Uncle R.B. lifted the tailgate, slid the pins into place, slapped me on the back and said, “Good job. Let’s go call Bud and see if he wants to go huntin’.”

And that was that. He never spoke of the demolished fencepost again.

I could fill a book with the lessons I learned from Uncle R.B. during that one episode. I learned that men don’t let work go undone when work needs doing. When someone breaks something, no need to make an ordeal out of it; just have him fix it. Then, get on with life. Keep everything in perspective; people are more important than fenceposts. When a man makes a mistake, expect him to take responsibility and let him keep his dignity. If you keep misfortune in perspective, you can turn it into something that strengthens the relationship instead of something that tears it down. How a man handles a mistake is more important than how many he makes. Treat a boy like a man, and he’ll become one faster. Allow a child to take responsibility for a mistake, assist him where he’s not up to the task, and you will build his self-esteem. . . .

Mentoring is a big concept these days, with lots of manuals and seminars to teach us the right methods. Granted, mentoring carries an awesome responsibility. Look at it directly and you can’t help but shrink from the task. And probably like you, I’m not quite sure I can handle it. Perhaps if I could find the right book or attend a conference, I would feel more confident.

But, then, Uncle R.B. taught me something about mentoring too. However profound, it’s not that complicated. A mentor needs only two things: a protégé and a willingness to be transparent. My uncle merely lived life as it came to him and took enough interest in me to invite me along for the ride. Our time together took care of the rest.

Within your sphere of influence, God has placed at least one person that could benefit from your experience, your training, your pain, your age, or your position of responsibility. No need for curriculum. No need for an agenda to structure the learning. He or she doesn’t even need to know what you’re doing. Just extend the invitation to join you from time to time. As you work and play together, the Lord will use your transparency to expand the world of another.

Who was the greatest influence in your life? How is your life or the way you view the world shaped by the influence of this person?

2 thoughts on “Uncle “Red Beans” and Me”